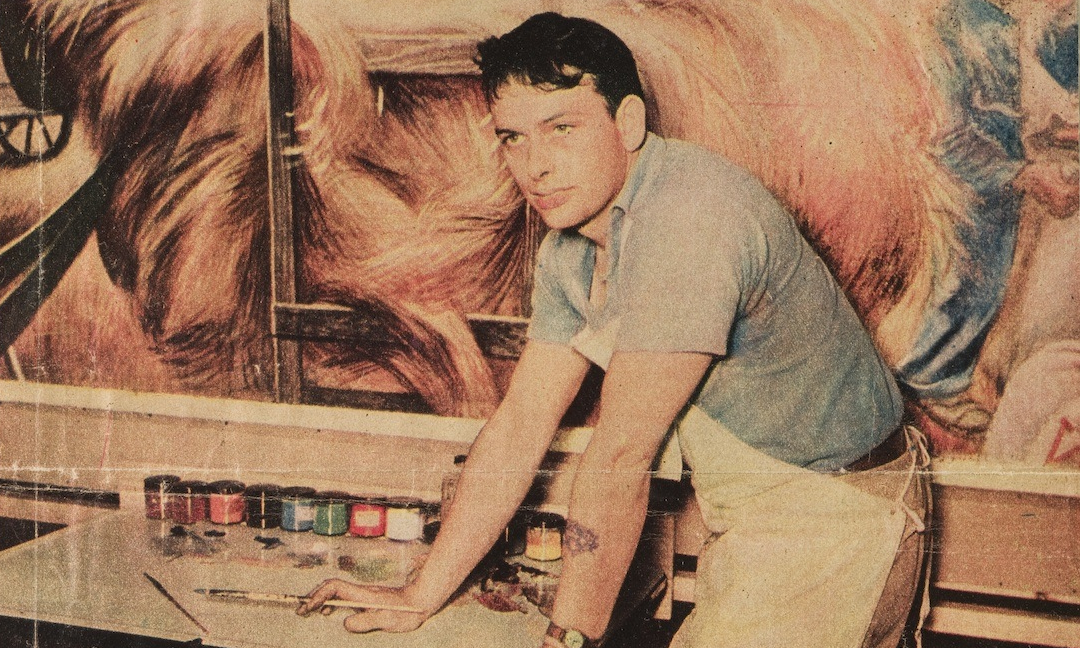 While art history has favored another Missourian, Thomas Hart Benton, in the canon of regionalist art, during the 1930s leftist critics looked not to Benton but to Joe Jones as the artist who best expressed the experiences and struggles of those living in the Midwest. Jones, a painter and printmaker from St. Louis, came into national prominence in the spring of 1935 with a critically acclaimed solo exhibition at the ACA Gallery in New York.  His striking images of St. Louis workers and drought-ravaged farms were so well received that the gallery reopened the exhibition a second time later that summer with additional lithographs. The St. Louis native would become a fixture in the art world during these years with art works engaging leftist themes before turning his attention to commercial art commissions in the 1940s.

I first learned about Jones in 2008 when I became involved as a researcher for the first major exhibition on his work at the Saint Louis Art Museum. While writing the chronology and several short sidebar essays for the exhibition catalogue, my fascination with his work grew. In 2014, my own essay about the artist’s career was published in the anthology Regionalists on the Left.

Jones, I came to learn, is a particularly notable artist for the ways his work complicates more familiar understandings of art about the Midwest. Like his more conservative regional colleagues Benton and Grant Wood, Jones found inspiration in the rural countryside, but he also engaged with explicitly urban issues. More importantly, his outlook differed dramatically from his better-known peers. While both Benton and Wood imbued the region with a sense of nostalgia, Jones constructed the space as a site of dynamic struggle. A closer look at one of Jones’s most controversial works, Social Protest In St. Louis, enables us expand our very conception of regionalist art.

More than any other American visual artist in the period, Jones was what folklorist B. A. Botkin termed a “proletarian regionalist” (1). In his art and actions, Jones had more in common with his radical literary colleagues than with the regionalist artists who would later come to dominate the art-historical narrative. His leftist sensibility was shaped in large part by his membership in the Communist Party, which seems to have given him a sense of social purpose throughout much of the 1930s.

But it also derived in part from his working-class roots. Born in north St. Louis, he was the youngest of six children, all supported by the meager income of their father, Frank, a struggling housepainter. After completing grade school, Joe made ends meet by working as an apprentice for his father. He continued to take on housepainting jobs early on in his career. This background not only brought him firsthand experience with painting (albeit in an industrial form) but it also provided him with a sense of empathy for others struggling during the economic downturn during the Depression. Jones did not begin his career a leftist artist, however, nor did he initially craft his public persona in this way. Rather, when he began working as a professional artist around 1930, he was attracted to the liberating expression of artistic modernism. He applied this pictorial language to traditional subjects—still lifes, landscapes, nudes—to explore the limits of those conventions through the use of simplified forms and a reduced color palette. Any hint of the tremendous social problems in St. Louis, a city hit hard by the Depression, remained largely absent in his work and activism during these initial years of his career.

All of this would abruptly change in the fall of 1933, after Jones returned from his first trip to the East Coast that summer. It was there, while spending two months in an art colony in Provincetown, MA, that he first began to engage with leftist ideologies through a group of painters, teachers, and workers in the area.  On this trip he discovered class consciousness and returned to St. Louis that fall a Communist. From that point until the end of the decade, his art brought attention to social justice and labor issues specific to the Midwest and focused on St. Louis, especially, as a site of political agitation.

Nowhere was this newfound sense of political purpose better expressed than in first major project executed upon his return, a large-scale mural titled Social Protest in Old St. Louis (1934). This work exemplifies his early engagement with proletarian regionalism. The events surrounding the creation and reception of the mural—which no longer survives; it was censored and fell into disrepair—also demonstrate the opposition he faced in the city once he publicly declared his allegiance to the Communist Party. After returning from the East Coast he began to teach the Unemployed Art Class, which offered free instruction to a small group of unemployed artists on the premises of the vacated Old Courthouse. The mural became their first group project (conceived by Jones but executed collectively by seven of the students). This work was thus intimately tied to the Unemployed Art Class, designed by Jones to provide unemployed students in the area with free training.

The context of the Unemployed Art Class is critical to the program for the mural. According to the St. Louis Post-Dispatch (January 21, 1934) Jones hoped to use the class to develop what he thought of as an:

“…art in St. Louis that will express the regional characteristics of the city and the Middle West.”

However, he defined this art as one of free expression:

“…regardless of whether [the students’] work is a protest against the social, economic or political conditions of the day.”

This constituted a radical redefinition of regional art from its more mainstream context. This understanding of regionalism became one of the most contentious aspects of the class.  The interracial composition of the group, about half of whom were African American, was also controversial. When Jones and his class unveiled their large-scale work, tensions that had already been brewing between city officials and the class reached fever pitch.

Social Protest in Old Saint Louis focused especially on the role of African Americans as labor agitators and featured episodes emphasizing the Communist Party’s importance within the city. The program of the work centered on a group of black riverboat dockworkers whose solid bodies and steady poses formed a dynamic compositional anchor. Part of the composition included a demonstration scene that was likely a reference to the 1933 Nut Pickers Strike involving employees of the Funsten Nut Company. This motif was highly significant to the Communist Party, which had been instrumental in organizing the strike, as well as to African-American women, who had played the central role in its success. Taken as a whole, the mural was a work that constituted an entire reordering of race and class within St. Louis.

The work was purposefully provocative and, at its unveiling, was accompanied by posters from the Soviet Union that further incited anger among Jones’s most ardent critics. About one month after the unveiling, a group that claimed affiliation with the American Fascist League vandalized the classroom. This incident had the effect of rallying a number of key regional proletarian activists around the mural. Jones himself, meanwhile, continued to teach the class throughout the spring and summer. These responses seemed to further agitate his critics. By the end of the year, a city official ordered Jones to vacate the premises immediately under the assumption that the classroom was being used as a Communist meeting place. Soon after, city officials forced an eviction and had the doors to the classroom padlocked.

Although the city used Jones’s radical political to justify shutting down the class, racial elements were undoubtedly also in play. Jones’s decision to teach an interracial class in this period would have been remarkable. The symbolism of encouraging African American protest in the Old Courthouse—the site where slaves were once sold and where the Dredd Scott case was heard—would not have been lost on local officials. Although Jones and his students would petition to reopen the class, they were ultimately unsuccessful, and the mural, which had been produced with cheap materials (chalk and beaverboard), quickly fell into permanent disrepair.

The Legacy of Social Protest in Old St. Louis

Despite the defeat of the censorship battle, Social Protest  and the Unemployed Art Class represent one of Jones’s most successful endeavors to bridge artists and workers in the class struggle. The controversy around the art class served as a rallying point that brought together other leftist activists in the region and also drew national attention in the radical press to social and artistic issues important to St. Louis.

For Jones, the work also inspired further activism, albeit largely outside of St. Louis. Jones held exhibitions regularly in New York for the rest of the decade featuring art work focused on themes of poverty and social justice in the Midwest. In 1935, he also produced a mural for the radical Commonwealth College, in Mena, Arkansas, that included anti-lynching content. Taken as a whole, his 1930s works (discussed in my detail in my essay an in the Saint Louis Art Museum exhibition catalogue, Joe Jones: Radical Painter of the American Scene) formed a vision of the Midwest as a site of political transformation.

Jones’s career speaks to a counter-narrative to regional art that explicitly asserts itself in opposition to this better-known discourse embodied in the more nostalgic work of Wood and Benton. His career complicates our very conception of regionalist art, invigorating it with a vital political energy.

[1] Botkin’s quote is taken from “Regionalism and Culture,” in The Writer in a Changing World, ed. Henry Hart (Equinox Cooperative Press, 1937).

The blog post is adapted from my essay “Radical Regionalism: The Case of Joe Jones,” published in Radical Regionalists on the Left, a volume of essays on sixteen progressive artists, intellectuals, and writers of the West, edited by Michael Steiner and published by the University of Oklahoma Press in 2014.